Before the new American whiskey renaissance began around 2010 directly following the craft vodka “gold rush” in 2006, an American Pure Malt Whiskey would’ve been a laughable suggestion.  Leave it to the Scots they’d say, as the Scottish not only invented Single Malt, but they’ve been producing it since way before America was even a twinkle in Great Britain’s eye.  However, leaving the production of Single Malt Whiskey to the Scots means being willing to forfeit our right as Americans to stomp all over Old World traditions; which as we all well know is an American pastime that is held in the highest regard, second only to baseball.

So if we plan to go ahead and produce the Scot’s personal brand of the water of life, why not go ahead and drop the “e” and call it Scotch Whisky?  Because lawyers.  As of 2009, the Scotch Whiskey Regulations (SWR) outlined that the birth of any whisky to be called “Scotch” must come from Scotland, because “if it’s not Scottish, it’s crap.”  We could fault them for taking their special titles and going home, however since the US Congress declared in 1965 that “any whiskey not produced in America can’t be called bourbon“, they’re likely to choose to agree to disagree.

As a consequence of all these petty rules and regulations, introducing even the most enthused whiskey/whisky fiends to the idea of delicious Single Malt American Whiskey that can rise above the standard perception that it is nothing more than some kind of weak knockoff of the real thing, requires more than a bit of velocity. 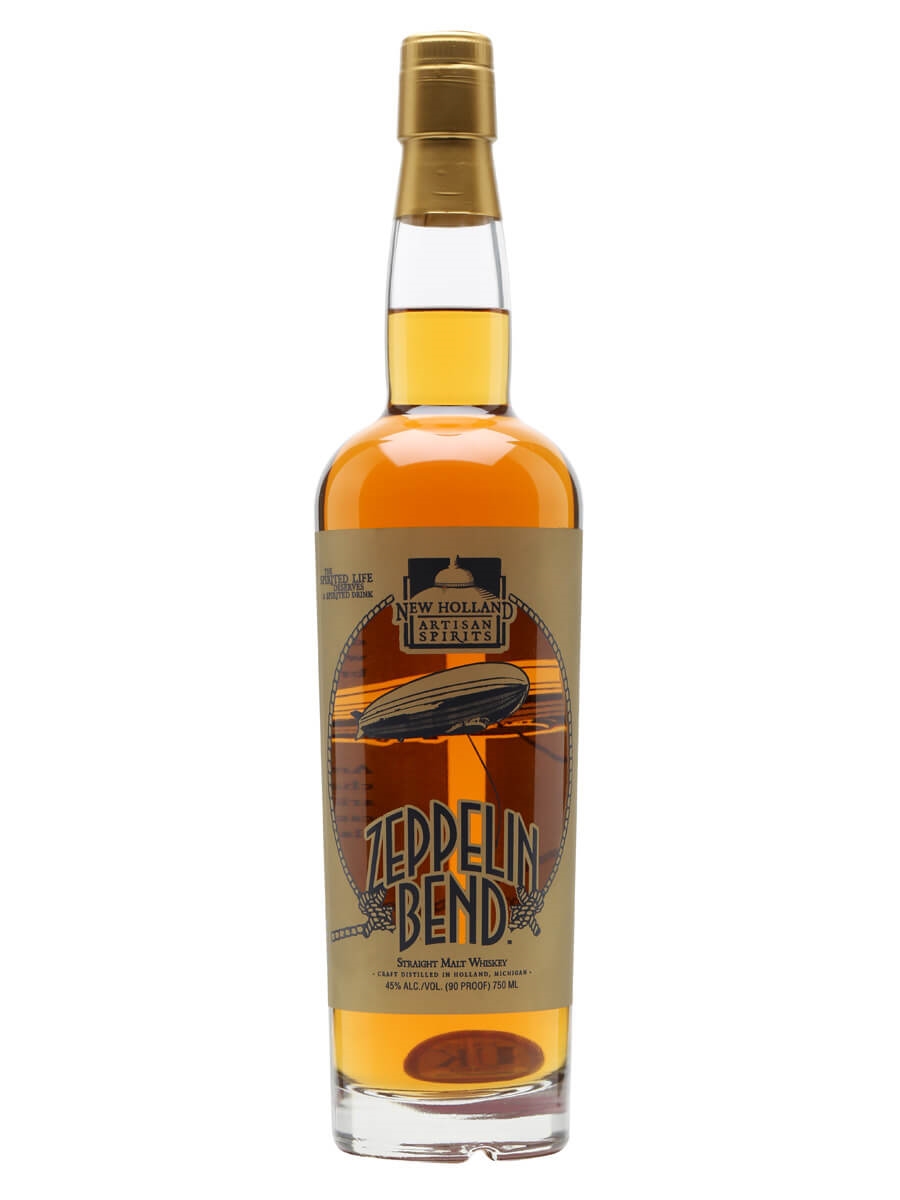 Introducing a whiskey that has no qualms with “rising” to the challenge, New Holland’s Zeppelin Bend.  Don’t let the logo displaying a hydrogen airship fool you, this spirit has no plans to crash and burn.  In fact, it won Best American Whiskey at the International Whisky Competition after its release in 2014.  That’s right, it won internationally so it clearly holds up to the standards set by the folks across the pond; which is commendable in and of itself.

Prep: I recommend you take this with a splash of water, like you would any other young single malt, to open up the flavor profile.

Tasting Notes: If you’re as stubborn as I am, and you tried a swig of the stuff without any water, it burns as hot as the Hindenburg.  Too soon?  However, once you’ve dusted all the soot out of your mouth and decided to take it as recommended, you will find that it is the definition of smooth sailing.  Big clove and vanilla notes are present from the initial take off and as you begin to reach its holding altitude you will find brushes of toffee whirring past your palette.  Once you descend into the finish, lingering impressions of oak will appear to guide you back to solid ground.

Rating:  This whiskey truly transcends the perception that American Single Malt will never measure up.  I’d say this airship has definitely earned its wings.

In The (Good) News

Luke’s Toy Factory trucks to be sold in Europe

Ball and Buck Offers Curated ‘Made in America’ Retail Experience

Team USA gloves made in Gloversville

Chocolate that’s too good to eat